skip to main | skip to sidebar

Sorry, no pictures yet.  This is just the story of my adventures.  I admit I'm a finicky shopper.  And besides having a degree in Textiles and Clothing (so I know what I need and what I don't on the machine and why and how I want it to work), I used to sell sewing machines.  Those are a really bad combination for a salesman.
If I actually told you about how I was treated by the Bernina dealer last Wednesday, you'd understand when I say I'd sew with my nose before I dealt with that place again!  And, unfortunately, the machine is only as good as the dealer support.  I called Bernina USA (if anyone needs the phone number, just ask) and they were VERY nice but can't really do anything themselves to fix the problem.  She directed me to another dealer who, when I called to see if they could fix it, promptly told me 'Berninas are temperamental' and told me about his Brother machines.
Before I left to shop, I spent several hours online reading reviews of all the brands so I felt I had some additional information I'd need.  Granted, I've never seen a 'C' review.  It's either an A or an F but I thought that was better than nothing.
I went to the Pfaff dealer and, while I was there, I heard the salesman talking to a man and his wife who brought an embroidery machine in and asked about getting it fixed.  His reply - "Well, perhaps you should just get a new one" and he sat them down at the most expensive machine on the floor.  I left and went to look at the Brothers after hearing that.  I want need to know I can get service if I need it.

At the Brother dealer, the machines seemed good enough but I just can't get the words 'Brother' and 'junk' out of my head.  The machines really did seem to do a nice stitch but it's an old prejudice, even if it's not correct, and I know I'd never get it out of my mind and wouldn't have been happy.  At both Pfaff and Brother, I asked to sew on the Janome that's somewhere around $2500 retail (but on Amazon it's $1499) and neither would let me near it.  Perhaps their inflated price was the issue.  And it also made me unhappy with their customer service.  So not good!  At the Brother dealer, I mentioned that the model I wanted to see had gotten really good reviews.  He promptly told me that was on the small, less expensive machines we'd use for a class.  Well, no it wasn't but he wouldn't say if he even had the machine I asked about.

Did you know Singer bought out Pfaff and Viking?  I hadn't.  And now both  are made in either Taiwan or China.  I don't remember which.  I called the dealer to verify and was told that's correct.  Apparently all the machines are made there.

Then I went to the Elna dealer.  (He didn't carry Janome so no issue with that.)  I asked which machine brand needed repairs the most and he didn't really want to say.  When I told him I'm currently using a 40-year-old Kenmore, he said some of those were really good machines.  My thought was - this is a good start!  He never trash talked another brand and if I asked a question and he didn't know the answer, he said so.  I'd much prefer that to making up something.  They never tried to steer me to a more expensive machine than what I said I want.  The only problem is the model I want isn't in stock.

I took all my little fabric pieces with me and stitched at each dealer.  Then I compared the results side by side.  There truly wasn't a difference that I could see.  They all did a nice stitch and a good buttonhole.  It all came down to the bells and whistles I wanted and the salesmen.  The Pfaff has the built in walking foot which I liked but the stitch selector on my first choice uses a stylus on a tiny screen and wasn't something I'd want to use and I sew a lot.  I don't sew quilt tops only.  I make a lot of garments, too - some cotton, some silk, and I use upholstery fabric for other projects.  The stitch selector and the salesman made me decide against that one.  My old prejudices said no to the Brother and the machine I'd choose from their line was $1000 more than the Elna.

And I really like the Elna.  The salesman offered me a very good price and then the shop owner lowered it!

So, the result is I don't get it for about a week but I can wait.  The Bernina's been broken for over a month.   When I get it and have it unpacked, I'll take a picture of my new baby.  I feel like a little kid waiting for Christmas!
Posted by Mary at 10:41 AM 6 comments:

Happy Thanksgiving to everyone!  I'm very lucky - most of my family lives close.  Even though I'm a widow (close to 16 years), I always remember today's date because it would have been my husband's birthday.  But I'm still lucky because when I think of him, I have very happy thoughts.  We were really happy together and I know I had something a lot of people only wish for.  I'm very thankful that I didn't miss it!
I hope all of you in the USA have a wonderful Thanksgiving and that those of you outside the USA have a wonderful Thursday!
Posted by Mary at 9:22 AM 2 comments:

I meant to take a picture of the entire stack of fabrics I was using but that didn't happen because I kept adding.  Every time I thought I had everything, I'd start sewing and then pull another one out of a different bin.  I finally had to put away part of the mess or I wouldn't have been able to get to the table.  These are  some of the fabrics going in the quilt.
I've never cut away the base fabric when I applique but this one was such a big section and I could see the background fabric too well so I gave it a try.
There are eight uneven log cabin blocks, four for the top border and four for the bottom, all different fabrics except the pink with flowers in the center. 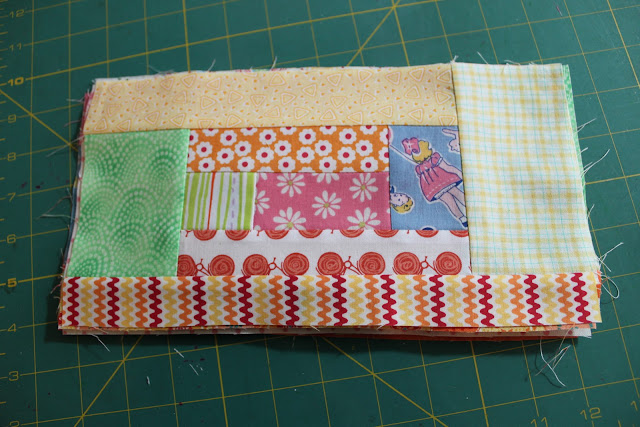 And this is why I keep some scraps I found in the bin.  I think the piece was 5x5 (or else it was 4x4) but it's one of my favorites and this seems to be all that's left of it. 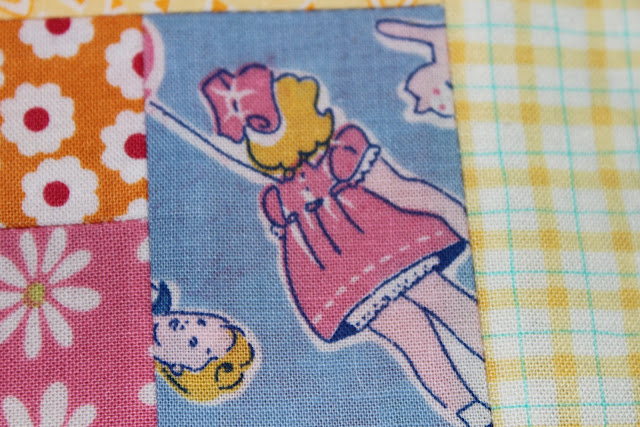 What's wrong with this picture?

The main thing wrong is this is where my Bernina lives.  When it's home.  It's been in the shop for almost three weeks and I really miss it.  Did it have to pick this time of year to quit?  Apparently, a board was bad.  Or more than one because one has been replaced and it's still not working so another was ordered but has not arrived yet.  This is the Kenmore that I got when my oldest daughter was an infant and luckily I've kept it cleaned and oiled.  It has a little something that goes in the bobbin case and then does a one thread chain stitch which is wonderful for basting.  Flat bed only, no free arm but I don't use that feature very often anyway.  I didn't realize, though, how often I use my knee lift because I still find my knee going for it after three weeks.  No needle up - needle down button.  No needle threader.  I feel like I'm living in the dark ages but at least I have a machine that sews.  I didn't get out my Featherweight because I needed to zigzag and this one does do a very nice stitch.  You can see the little flip light I keep behind it for extra light - I'm so glad I put that there!
One thing I did (that maybe I shouldn't have but it worked!) is use my Bernina bobbins because they were already threaded with the right colors and I only have three for this machine that I can find.  I figured it was worth a try!  I'm not recommending it to anyone else just in case it doesn't work in yours but I'm really glad it worked for this one.
Posted by Mary at 8:58 AM 6 comments:

I've been going to my daughter's to help with the children, cooking, and anything else she needs for several weeks now.  She's sleep deprived and since she had a C-section, she's not to lift the older children for another two weeks so her in-laws and I have been taking turns helping out.  Trying to think up activities for a toddler and a pre-schooler can be challenging!  I decided it's time my granddaughter learns to sew so I made a trip to JoAnn's and got some plastic canvas and plastic needles.  Be warned if you decide to do this that the blue plastic needles are just a smidge bigger than the holes in the plastic canvas and need a good tug to get them through.  Luckily, she has a good grip!  She said this will be a blanket for one of her dolls.

Her brother wanted to show me his Elmo socks but wouldn't pull his pants up enough to see the picture.

And of course here's Abigail - one month today!
Posted by Mary at 8:16 AM 6 comments:

Mary
If it has fabric or yarn in it, I like to work with it. I love to sew. I like to knit and crochet. And I like to bake and eat the results. All content on this blog is my copyright. If you repost anything, please link back to this blog. And thanks for visiting!